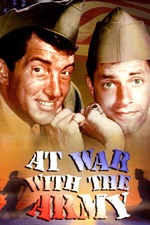 Mickey Mouse Military. As someone who was in a military-esque youth program for six years of my young life, this kind of no-real-conflict army cosplay parody appeals to me. And Lewis' young high-pitched nasally voice doesn't bother me as much when it's in service to solid physical comedy and banter with Dean Martin, whose early dynamic seems to be "cool singing friend dragging around lame singing friend". It's all very silly, but it's also weirdly casual in a way I kind of dig. A bit stagey and small-scale, but I guess if you were to take the piss out of the army, doing nothing and going nowhere seems fitting.

Two of Jerry Lewis' first three films feature him doing an impression of Barry Fitzgerald of all people. A strange fixation.