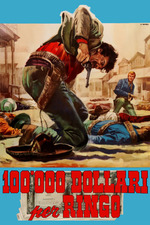 There are a bunch of spaghetti westerns that I haven't ever seen but I have been listening to the soundtrack for 15-20 years. This is one of them.

I really like this Bruno Nicolai score (with orchestrations by Ennio Morricone). It's very different from Morricone's scores for Leone's films. It's full of heroic fanfares with a big brass sound. The scenes in this flick that are sweeping landscape shots with the music playing are great. Unfortunately, the scenes of drama are flat, uninteresting, and often border on nonsensical. The action scenes are merely adequate.

Richard Harrison is a brawny, handsome, and uninteresting leading man. No one else in the cast makes much of an impression either, except for the European actors playing Apaches, and the impression they make is not great.

Skip this one unless you're a spaghetti western completist.