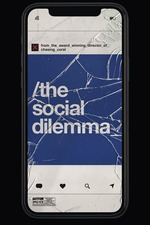 this is so needlessly ominous and dramatic but it ultimately succeeds in what it aims to do - inform general audiences on the deeply serious threat of internet development and social media. 65% of this could've been cut and the loose fictional element of this doc served no purpose except to root fear into the 35 year old mums at home watching this on their phone. it's so corny and patronizing and at times made me feel as if I was watching a Prince Ea Facebook video.

it's almost ironic how this doc aims to bring awareness to the manipulation of media on the people that consume it while tediously luring you in with a commercialized, over-dramatic presentation of information.

and it might just be because i grew up on the internet and have been in spaces where this kind of knowledge is mostly common for a long time but this doc seems to assume total ignorance of its own audience. it's 2020 and i'd like to think most people would know a lot of this stuff already, but alas. i also kinda had a problem with the amount of rich capitalists on here that contributed to the problem who kept saying things like "it's no ones fault" and "there's nothing we can really do", when that's simply untrue and is an act of willful deflection. they don't want to address the problem. they don't want to challenge their peers in the tech industry. it almost seemed like some of these people were proud of being the ones who initially worked on these programs that have caused so much harm. not an ounce of remorse is shown, just a big old "whoops". but hey, there was one guy at the end who gave somewhat of a *possibly* marx inspired speech, so maybe some of them get it?

again, i think it ultimately serves its purpose well but i just wish it would've cut the shit.