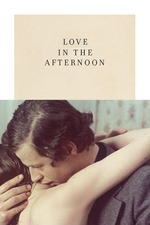 Definitely my favorite out of all of Rohmer’s Moral Tales. It carried a lot of the same themes of the  previous films (green representing temptation, the easy but undesirable girl, some selfish dumb fuck main character), but this one carried more weight as a “moral tale” in that the morals brought into question actually felt controversial and not obviously wrong. In the previous films, the lead would play with the emotions of some desperate girl even though he knew he wasn’t truly interested. However, in Love in the Afternoon, while Frederic is happily married, he does feel a genuine connection towards Chloe,  complicating things. The “moral” I took away was that the idea that we seize to feel any other romantic connections/desires once we’re in a relationship is false. By keeping those desires a secret and acting like they’re forbidden, we are only making them more taboo, and therefore more desirable. We always want what we can’t have.