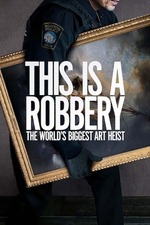 This is a Robbery: The World's Biggest Art Heist 2021

Will Weldon’s review published on Letterboxd:

My wife is from Boston and told me all about the Isabella Stewart Gardener robbery a couple of weeks ago. It took her like thirty minutes, and I knew essentially 95% of what this documentary had to say, so I have no idea why this is like four hours long. It gives like thirty minutes just to the world's wrongest US attorney, for God's sake. I honestly don't think it's dramatic to describe Netflix's recent doc output as irresponsible filmmaking, the way they seem to give credence to people with theories that are demonstrated to be wrong like twenty minutes later. Just don't give them the airtime! It's not dramatic, it's fucking annoying. Why are you wasting our time making us listen to some idiotic US attorney accusing a security guard of stealing a painting when you know you also have footage of a security consultant looking at the motion detector data from the robbery and saying the guard literally could not have done the robbery?! Fuck off with this shit! That footage only has value as a reminder that you should not ever delude yourself into thinking law enforcement has smart people working for them. This fucking dumb bitch says like a dozen incorrect things over the course of like five minutes, to the point that other interviewees laugh at how stupid his theories are. Just cut him out! The show also interviews an art theft expert from Scotland Yard, and he seems to be 100% more grounded in reality. He would've been just fine.

God, do I ever hate that US attorney.

Will is using Letterboxd to share film reviews and lists with friends. Join here.