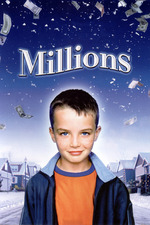 Roger Ebert gave this film a 4/4, so don't let my inability to engage with this film deter you. Personally, I feel Millions is a simplistic morality tale, revolving around two brothers who find millions of euros. The first wishes to spend it, bask in the general benefits that are derived from vast wealth. The second, our protagonist, wants to give it all away, an impulse derived from his fascination of the saints. The story plays out as expected, firmly set within it's family centric conceits. Therein lies my issue with the film, and it's one that Boyle often threatens to perpetrate. His rapid, eccentric and loud visual style is the star of the show, drowning any emotional impact it may have had by never allowing the film to have a quiet, reserved moment of sincerity. Millions has a big heart, one a bit too sentimental, obvious and (sorry) infantile for myself, though. I was put off by Boyle's mimicking of childhood whimsy, longing for something a bit more grounded. An admirable rendition on family film making but one that doesn't quite work.