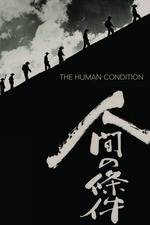 This is my favorite trilogy in the history of cinema, however, I wanted to assume it as a single full-length film and in the same way I wanted to include it in my TOP. The praise for this work is indeterminable, a shocking story and great artistic contribution. In fact my first Kobayashi film was Harakiri, Tatsuya Nakadai was repeating in his main role and fulfilling a great contribution from oriental cinema compared to Kurosawa-Mifune. Kobayashi attacks the reality of his country and its stories, which is very remarkable in a world where it is always about glorifying the patriotism of war in each country; This leaves aside great victories and feats to show how relationships and the human being as such can be damaged in this environment. It is a social criticism with filmic mastery, with an unclear kind of epic narrative stained with dirty darkness.

Each segment is composed of a great photograph that highlights the visual in a wonderful way, a journey by the hand of its protagonist who, at the limit of his physical and moral strength, lives a hard transition and knows the truly dark of the human being. A constant search for life and loved ones as a family that are not in the context of the current misery and hardship. What can also be assumed as the desire for redemption and posthumous forgiveness for people, who regardless of their region, suffered the cursed fate of living in times where they railed between sides for the power struggle; perhaps this is a denunciation towards these dark times of humanity.

The voice-over as a dialogue that accompanies the story was widely used to recall the memories and reflect internally on the events that occurred, a great technical and shocking element. It is a very dramatic journey that is lived here, from a starting point where it was launched from a favorable situation to a point where you are in the fight for your survival in stages where the war seemed to have ended. The journey is a path where the most courageous and with great strength will be able to resist and will be able to avoid the various fronts that may affect them.

The character Kaji is an upright man and a pacifist, at the end of the trilogy he went from being a war rookie to which he was repeatedly reprimanded for leading the opposition to injustice, he became a veteran who carried the story of committing actions not proper to his being, or perhaps that was always his way of acting? He became someone tough, a strategist of collective action who feels with the competent authority to reprimand his companions.

It is a very well elaborated production on acting according to the context that conditions us, on the true human condition.