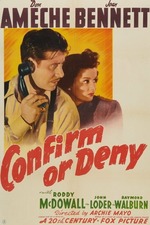 It's a wartime newspaper story, American hack in Blitz London trying to get his theory of a german invasion past the censor and to the states a few minutes ahead of the competition by wheedling space on telegraph lines and replacing his bombed out office with borrowed teletype machines in the basement of his hotel.

It's from a Sam Fuller story, and it has his in your face unstinting love of the go getting American newsman in every frame, it also has a pretty convincing depiction of London in the blitz with a lot of seemingly realistic detail of crammed tube station air raid shelters and wartime romance. It's got it's propaganda role to play with a subplot about Roddy McDowall's 12 year old blitz victim that is surprisingly hard hitting.

Apparently there is some uncredited Fritz Lang work here, like all of these cases it's impossible not to look at the better scenes, in this case a lot of the more spectacular war damage and not see his hand in it but who knows what he did if anything. Like the Fuller connection it's another interesting footnote.

The leads are good, Don Ameche has a lot of energy and a slighty smaller but still significant amount of charm and he does well enough as the fast talking, hard drinking, woman chasing romantic yank overseas. There are people out there who could have played it better but he's decent.

As in Joan Bennett, playing British, playing a part Myrna Loy would have nailed, if it was a bigger movie, at MGM, opposite Gable.

Eric Blore provides some comic relief and wasn't as annoying as normal, Preston Sturges fave Raymond Walburn is good as Ameche's boss. Actually a lot of the bit parts and subplots are good, like Fuller's own Park Row or another (better) movie based on his writing, Scandal Sheet, it is a movie that is luxuriating in the detail and glory of the newsman on a crusade and it has the ring of, if not truth, than pretty good barroom legend.

It's not a great movie by any means but its a superior b movie propaganda piece that was worth my time.