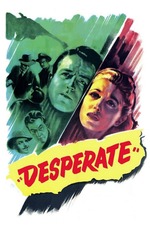 An ex-GI trucker is forced into driving for a heist and gets the blame when a cop is shot, he takes his wife on the run to escape both the cops and gangsters.

Very well shot, with Mann seeming to hit you with shot after shot that could stand as exemplars of classic Noir cliche, the way he overloads the central characters homelife with frills and light and kitsch before switching to the shadows, high constrast and tight angles of Raymond Burr's gangster crew. The scene of them working Brodie's hero over by the light of swinging lamp is the sort of thing a director these days would use to tell you 'This is Noir' but it doesnt feel old here, instead you get that real, hard to fake sense of a man who has totally lost control of his world for who things will never be right again. Noir sensibility to go with the cinematography

The first act is great, maybe because the characters hit you as archetypes and you can just enjoy the incredibly tense build up and execution of a crime gone wrong with all the backstory filled in solely via the visual short hand of Mann's choices. You instantly know everything about these people's past, present and future by Mann's shot selection and lighting and mise en scene.

It loses ground in the middle when everything has been set up and you've worked through the desperation of the couple on the run whose carefully depicted softness has been ripped apart. When you actually have to spend time with the performances instead of the style a flabbiness develops and the lack of charisma of the leads and the bit part townsfolk and relatives tells.

Thankfully the final act brings Raymond Burr back, and Robard's cool cop and Mann starts with the visual pyrotechnics again after sleeping through the middle act.

Burr, as he is in all movies like this is a malevolent force who dominates the screen, one of the true great movie heavies before he was lost to TV