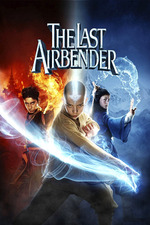 Sometimes though there's anomalies, there's films that a lot of people like but have an artistic vision and can touch the hearts of many. Shawshank redemption, the original Star Wars trilogy, E.T., Schindler's list, Pulp Fiction, Spirited Away, the Godfather 1 & 2 and many more classics. Perhaps as far as shows go you can even include the original cartoon "The last airbender" is based off of. Maybe you'd even include "The sixth sense" in that list of brilliant movies.

Why I bring up these commercial masterpieces is because they're a rare breed that manage to completely satisfy several people and make money doing so.

The last airbender is the only film I've ever come across that manages to do the exact opposite of this, and not just make certain people hate it. Every single person of every background, experiences, identity and any other quality can find something in this to fucking despise to the highest degree.

You liked the show? HERE'S A BASIC RETELLING WITH MAJOR PLOT HOLES.

You enjoy fun? THIS IS THE LAST AIRBENDER.

Nobody can enjoy this, a child maybe could but children love superficial things. They'll 100% get bored, believe me because I was one of those children.

Simply put, The Last Airbender is an anomaly of unentertaining pain and boredom and I, without exaggeration consider it the worst studio film ever made (that I know of). This film is so bad that every review I've ever read is somehow as boring as the film itself just by association, so I don't even know why I bothered.

Rise of the Guardians