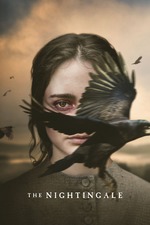 I’m kind of upset. I don’t mind violence in film so that’s not the issue as it seems to be for so many people. The Nightingale is a strange follow up to The Babadook for Kent. While I loved her debut, this falls flat in both execution and character. I would say Aisling Franciosi did an amazing job, but for most of the film, all tension was stunted by a cut to the next scene. I can feel her potential for truly giving a breathtaking performance but everything was against her in here. I rarely saw anything but rage and when a glimmer of something new came up, we had to jump over to the B-plot. She also has an incredibly beautiful voice, which is something I can say is a stand out.

On an overall thematic level, I find it hard to begin to equate the struggles of the women in these times to the struggles of the aboriginals. It seems to be a major message trying to be conveyed here and I can’t fully get on board with. Clare’s relationship with Billy is sometimes a solace amidst the lack of development in the film. That is, until the final choice he makes goes against any personal growth for Clare’s growth alone. He is used just as every other aboriginal in the story.

Also, for the amount of wonderful closeups of our lead, I never connected with Clare. I got the basis of her story and the insurmountable rage she lives with throughout the film, but we never stayed with any one shot for too long. It’s as if this was once a really beautiful 3 hour character study where someone then took a hacksaw to it and pieced together this rush job of a powerful story.

I like to play with the thought of this as a ghost story. Clare, having been in quite a few “she’s definitely dead” moments, may be the one haunting beyond the grave. The final moment seems to also hint to this. However, that is probably just me trying to justify that terrible character choice for Billy at the end.

This is just kind of the messy remnant of something that could’ve been good. I really wanted to love it, but I’ll be on the lookout for the next Aisling Franciosi to see if this was just a fluke in her potentially wonderful future.