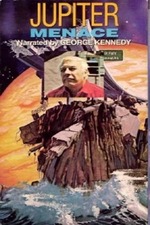 The statues of the “gods” from the Pantheon are now found in the Vatican Museum, with the exception of the great statue of Jupiter, which has been modified, re-titled, and seated on a throne in St. Peter’s Basilica in Rome. Thousands of pilgrims kiss the foot of Jupiter thinking it is a statue of Saint Peter. www.markbeast.org/images/peter-jupiter.jpg

as a gas giant, jupiter is a binary star waiting to happen: there is a crackling electrical sun at her heart ['the smokey god'], a harmonic storm system seen thru the red spot of jupiter's eye. in 2001,* the planet was struck by an artificial comet composed entirely of plutonium (not 1994's shoemaker-levy 9, more like shoemaker-levy 12-14, all heavy metals). with thousands of tons of plutonium forced into the mix, jupiter could get 'indigestion' causing not only fusion but fission, creating a nova ("the lucifer project") that ejects all of its matter into our solar system, as theorized in '2010' by arthur c clarke (who himself won a "jupiter award" in 1974). in 2003 the galileo spacecraft, carrying another payload of plutonium-238, was deliberately crashed into the planet to "avoid contaminating the ruins of jupiter's moons with earth bacteria." (see: brown dwarf, zeta reticuli, oort cloud)

army man: JUPITER MENACE (1982) host & narrator george kennedy "enlisted in the Army at 17 and served in World War II, opening the first Army Information Office that provided technical assistance to films and TV shows. Kennedy spent 16 years in the Army and left as a captain."

planetary earthquakes: the ram's head is NOT baphomet, the ram is amun-ra, jupiter ammon, the horned and hidden god ("a god with horns") father of the day, hidden creator, lord of the thrones. ammon's horn is the temporal lobe that creates invisible worlds, the horns manly p hall noticed on the moses of michelangelo and the corners of hebrew altars, a.k.a. the hippocampus.

hislop's two babylons (see: sun ra syllabus) identifies jesus as a renamed jupiter-puer or "jupiter the boy," a child deity worshiped in ancient rome (statues of jupiter-puer in his mothers lap were renamed mary & child). romans dedicated aelia capitolina to jupiter to drive out jews. annunaki are mining metallic gold on ganymede, which was visible to the naked eye before 20th c light/air pollution.

in addition to knowledge of sirius, dogon mythology in west africa includes saturns rings and jupiter's four major moons, given to them by amphibious beings (sumerians, 12th planet)

the red spot & other storms given as explanations for the radio signals of the black knight satellite/VALIS: letterboxd.com/pd187/film/in-search-of-the-wow-wow-wibble-woggle-wazzie-woodle-woo/

image: the circles of europa: europa.nasa.gov/resources/137/the-tyre-multi-ring-structure-on-europa/ (europa has a liquid ocean)