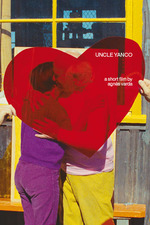 One of my foremost fears about getting older is my fear of drifting away from my distant relatives in Brazil, but even more so, losing contact with the stories within each of my relative's past and future bloodlines. And while my presence dwindles in the lives of my distant cousins and nieces, their own families grow to drown out my own influence in their own lives.

With Uncle Yanco, Agnes, assuming much more than just the role of the filmmaker, fulfills one of my own fantasies of a purposeful encounter with a long lost relative. Her stay never feels procedural as most gatherings do, and she incorporates him so casually and playfully into a personal document of her own. At one point, Agnes stages their very first encounter with several takes with her "Uncle" Yanco delivering a "Wow so your the daughter of.... how nice to meet you" in several different languages—like an old running joke between two close cousins. Both being members of the art community, they often display deep respect and interest in each others' craft. Yanco's colorful paintings are at one point given a loving montage with dramatic lighting and his own stagehands as if to give a limelight to his life's work. It's easy to see how Varda's relationship with Yanco is so much like the place he lives in: a floating house that would drift away in the San Francisco bay without a single strong knot of curiosity and mutual respect.

I wish to have the same encounter with a distant relative one day—to have meaningful discourse and an eye like Varda's that makes lost connections refreshing and passionate.