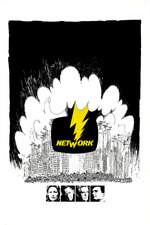 It simply should not be fact that a film made almost forty years ago is even MORE relevant today than it was at it's release. Clearly Sybil the Soothsayer had some creative input here. Network, along side this year's wonderfully inventive Her, are both highly accurate displays of the isolating effect of technology on our generation.

We're becoming desensitised. Some of us in the way that our emotions are hard to express, complacent with the banality of life, and others in the way that they buy a machine gun and waltz into a school. I personally have been aware of this for a while. I perhaps naively attributed this mostly to the stoic nature of British life, assuming all Brits were like this. Stiff upper lip and all that. But I don't know. Technology must have a factor in it.

I sometimes I think of doing an Into the Wild and just living in some random forest, away from it all. I'm too much of an unadventurous pussy to do that, though. First of all, I've become so dependent on technology I couldn't do without it, and secondly, I wouldn't even know how to survive if I had a fucking manual entitled "SURVIVAL MADE EASY" written by Bear Grylls.

To discuss the film in a non-thematic sense, however, it's incredibly well acted, being nominated for all four Academy Award acting categories, and winning three of them. Peter Finch is a powerhouse, a sense of childish wonder imbued into his off screen persona, contrasted deeply against his onscreen Howard Beale, an enraged madman, with furious eyes staring deep into the camera. Dunaway, Holden and Straight all give consummate performances, there is no weak link.

The set design is impressive, whether it's the wall of endless television screens in Duvall's office or the show's set itself, the religious stained glass in the back, providing evidence backing up that Finch's "sermons" and his audience is a metaphor for religion. We're learning about two step theory in media class, and this is exactly what they mean. I'm glad we've moved on a bit further from that way of working.

The ultimate message I took away from Network, however, is that nobody is going to be our Howard Beale and call for action. If anyone did, they would be screwed by those more powerful than themselves. After all, Beale was rallying for power, he didn't have any to begin with. Only when all of us link arms and shout "I'M MAD AS HELL AND I'M NOT GOING TO TAKE IT ANY MORE", not because of a real life Howard Beale, and not out of a kneejerk reaction, but out of a deep determination to fix a direct target, will we accomplish it. But technology is desensitising us. Keeping us hushed. Order is created through chaos. And we need a little chaos.*

Network deserves it's reputation as a legendary film and it will continue to be just as well acclaimed forty years on from now and forty years after that too.