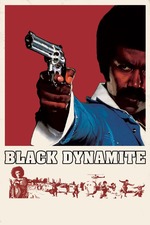 I really needed a great laugh and this homage/parody of the blaxploitation genre had me busting out laughing the whole time. The awesome swagger, funky music, over the top action, and slightly awkward line delivery all come together perfectly for this story all about cleaning up the streets and sticking it to the man.

"Now Aunt Billy, how many times have I told you not to call here and interrupt my Kung Fu!"

- In addition to kicking ass it is also fun to see our hero be super smooth with the ladies who find him irresistible. The sex scene turning into an animated version of the Kama Sutra was a great touch. But there is also that moment where he becomes scary mean to that one girl

- I did not recognize most of the cast, so it was fun to spot a few bigger name actors like Tommy Davidson, Arsenio Hall, Kym Whitley, Mike Starr, and Bokeem Woodbine

- Chili and donuts ... yuck LOL! Chicken and waffles, now that's more like it

- Well I have never seen an action montage quite like that before! It is ridiculously over the top with random action clips and stock footage, which made it not as engaging as your typical montage ... except for him taking out that one guy by picking up his car with a huge magnet

- It is hard to not just describe so many moments as just being straight up hilarious, but that scene when Black Dynamite and his guys figure out this elaborate scheme involving the Malt Liquor being drugged was just that

- This movie definitely does not shy away from the stereotypes of the 70s as they head to Kung Fu Island. That fire on the main baddie's head is my new favorite use of bad CGI for comedic effect

- Even the ghost of Abe Lincoln gets in on the action

"Black Dynamite, you're so righteous. This is also true ... Because wherever there's injustice, wrongs to be righted ... innocents to be defended, Black Dynamite will be there ... delivering ass-whoopings."

- Stick around during the credits for some great Black Dynamite animation, and I will have to check out the animated series at some point

So far I have really enjoyed these homages to blaxploitation, and it is about time that I check out some actual films from that era. Can you all give me some recommendations on where to get started?