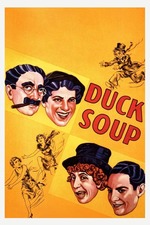 Enjoying the old fashion zany and some times mean comedy of the Marx Brothers took some getting used to, but now I am ready to see more hijinks from Groucho, Harpo, Chico, and I suppose Zeppo too. In this classic comedy they stir up trouble for everyone from political aristocrats to street vendors, as Groucho is appointed the leader of the country of Freedonia. With his talent for anti-diplomacy, it looks like they are headed for war for sure with the troublesome neighboring country of Sylvania.

"I am willing to do anything to prevent this war ... It's too late. I've already paid a month's rent on the battlefield."

- I did not know what to make of Groucho's big painted on mustache and eyebrows at first, especially with how odd it looks in the closeup shots. But it clicked in during the scene where they all dress like him, which highlighted what a unique comedic look he had that made him stand out ... much like Charlie Chaplin

- While Groucho is constantly dishing out sharp jokes and insults, its Harpo and Chico who are the wild trouble makers

- Harpo is silent and leans on physical comedy, like during the hilarious moment where he uses a handheld gas torch for a lighter. Also, he is constantly messing with people, like how he randomly cuts everything from cigars to pant pockets with his scissor

- Meantime, Chico also plays off Harpo's physical comedy as he joins him running circles around people, in addition to how he baffles people by talking in circles too

- Trying to get that speaker to turn down and eventually throwing it out the window ... I have had the urge to do that same thing to a few alarm clocks over the years

- Why not have this also be a musical, with everyone in this huge room flopping around on the floor, and then dancing while cheering for Freedonia!

- At this point, the movie is almost over with it only being around an hour and 9 minutes long

- When war is upon them during the climax they poke fun at the topic by showing how crazy war has been throughout history with all these different uniforms. From Harpo and Chico looking like they are ready for the American Revolution, Groucho in Civil War attire with a Tommy gun, a couple of soldiers suited up for WW1, just moments later they are all in British military uniforms, and then Groucho even wears a pioneer raccoon skin cap

- Help is on the way with firefighters, swimmers, runners, and herds of animals rushing to their aid!

- What a crazy silly ending as they start throwing apples at the leader of Sylvania who is stuck in a door, and then target the lady that begins singing the national anthem of Freedonia

I came into Duck Soup looking for it to impress me, but as it went along I started to ease up and just enjoy the anarchic style of the old school comedy it had to offer. I think Laurel and Hardy might be the last classic comedy stars that I still need to check out, any suggestions where I should start with them?