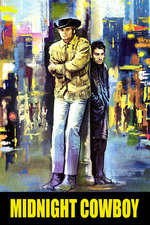 A bummer of a buddy movie dripping with arguably the best style of any of the New Hollywood era films.

"You know, Cass, that's a funny thing you mentioning money - 'cause I was just about to ask you for some."

I did not think much of Midnight Cowboy when I saw it in High School, but wow is it a powerhouse of a story all about delusion dreamers. Jon Voight stars as Joe Buck a naive hustler trying to charm his way to success in the big apple, with a cheesy old fashion Cowboy facade. And the only person that gives him the time of day is a meek local loser con man brilliantly played by Dustin Hoffman named Ratso Rizzo.

- What a provocative opening shot of an empty Texas drive-in movie theater, with one kid riding a playground spring horse under the big white screen

- It is inferred through flashbacks that Joe Buck had an unusual relationship with his Grandmother, which leads him to think that he can prostitute himself to rich older women in New York. We also see hints about an incident involving him and his girlfriend being assaulted

- Midnight Cowboy has such amazing style throughout that puts us in Joe Buck's haunted and delusional headspace, through the excellent camerawork and editing. Like the scene of him having sex fading to the highway in front of the bus

- Despite thinking he is a hustler he really is a sucker with his money, and throws what little cash he has around freely. But then he finds out what acts he must resort to in order to not go hungry

- Hoffman does not seem like himself at all as he transforms into the scuzzy Ratso, who after exploiting Joe forms an odd-couple partnership with him

- With Ratso's health worsening the two set off to make a better life for themselves in Ratso's fantasy destination of Sunny Florida. But he tragically dies on the bus just before they pull into Miami

While this is an odd story to say you enjoy, the brilliant way it is presented as we follow these two deeply flawed characters is what makes it so captivating.

Hunt for the Wilderpeople