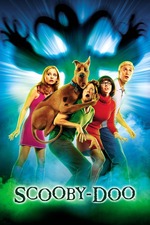 I am glad I came into this with low expectations, because this was a disaster.

The story was a mess, the CGI was awful, and the only redeeming factor was the good casting of the Mystery Gang. Freddie Prinze Jr., Sarah Michelle Gellar, and Matthew Lillard must all really like Scooby-Doo, because that is some great star power for such a terrible movie. But what really baffles me is how they got them all to return for the sequel. (Were they that desperate for a paycheck????) They all fit their characters really well even Velma, but she sort of gets lost in the mix since she is the least recognizable.

So in the story the gang gets together to solve a typical mystery, but then suddenly decide that they no longer what to work together and split up. Then 5 minutes later they all end up back together to solve a new mystery... so what was the point of splitting them up. With better writing they could have had conflict within the group without making it seem so contrived and pointless. The worst part is that the movie's surprise villain Scrappy-Doo's story line is just thrown in mid movie, to make it completely obvious that he is the one behind all of this, in the most rushed way possible. Plus I always liked Scrappy, so I thought it kind of sucked to see him being shown as such an outcast.

You can tell the movie is clearly aimed at kids because of all the really forced potty humor. So with that being said, were all the sexual innuendos and pot references really needed? I know they fit into the fabric of the original cartoon which used those references very subtly. But since this movie was way to dumb to be geared toward the original fan base, it just felt inappropriate for all that to be hanging out there for younger kids. Personally I watched the show plenty of times as a kid, but it was never one of my favorites.

Finally the CGI is by far the worst I have seen since I began reviewing movies on Letterboxd. The movie is all riding on this CGI dog, but there is never a moment where it feels like he is actually there. But he is not even the worst part, on Spooky Island there are these giant purple monsters that needed some serious additional rendering, because all their scenes just make the movie suddenly start looking like a cartoon with how fake it is.

Right from the opening scene I knew this was going to be completely misdirected and dumb, with how Shaggy ends up on a skateboard and then suddenly looks like he is competing in the X-Games. Then we get this really random cameo from Pamela Anderson, like any kids will know who she is. I get that sometimes filmmakers try to make movies for kids and their parents to enjoy, but this was seriously off the mark.

Overall my kids had a good time with it mostly because of all the potty humor, but I would not recommend checking this out if you are wanting to experience any Scooby-Doo nostalgia.