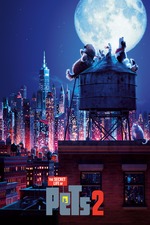 How secret are the lives of these pets, if the story checks off every imaginable box of topics that pet owners are already familiar with?

"Stuff happened, and now it is over."

The biggest issue with The Secret Life of Pets 2 is that it feels like a couple episodes of a TV show all cobbled together. I recall the first movie having a clear narrative of 'this is what happens when the owners are away'. But this time the story is all over the place, and the owners just kind of don't exist for long periods of time so the pets can do their thing.

The soundtrack has a few good moments like when 'Empire State of Mind' plays during the opening. All the animation was solid, but I found the character design odd with how long some of the human's legs were compared to the rest of their body.

"Ohh, now you have done it ... you pissed off Pickles." For me this one the funniest line in the whole film. I would have likely had a few more laughs, but unfortunately all the best jokes are in the trailer. Jenny Slate as Gidget is one of the funnier characters with how she hopelessly longs to be married to Max.

The movie starts out solid enough as Max falls in love with his owner's little boy. Sorry to say but Patton Oswalt was so bland as Max. It is too bad that Louis C.K.'s career went down the toilet, who originally voiced the character and gave him some real spunk. So the story sets up how Max worries too much about his little boy, which leads to him getting this nervous habit of scratching himself.

But then we get this whole other plot line of Max going out with his family to a farm, where he ends up learning to have more courage from an older dog. This plot works for how he randomly comes back into the picture to help save the day at the end, but has nothing to do with his relationship with the little boy, who mostly disappears for most of the movie.

The main voice talent holding the film up is Kevin Hart who plays the bunny Snowball. It is cute how he is this loud rabbit who likes to play into the imagination of the little girl who owns him. It is enjoyable to watch, but all of this comedy is so one-note and begins to feel repetitive after awhile. They also throw in these random hip-hop moments to make the character appear more cool from time to time. Tiffany Haddish voices this random new dog that seeks Snowballs help, but mostly ends up being more capable than this so called 'super hero'. Their chemistry is nothing amazing, but does give Heart someone fun to play off of.

Unfortunately, their storyline feels the most forced and random. Basically, they are out to help this Tiger escape from this Circus, run by an evil Russian that sounds like Boris from the 'Rocky and Bullwinkle Show'. So I guess the movie is anti-circus? It is hard to say because for some reason every animal except for the Tiger can talk, and they explain this away by saying it is a 'wild animal'.

The trick they show the tiger being miserable over does not even make any sense. The Russian guy wants a tiger to jump into a pool of water??? Also for some reason they decided to draw the tiger to look more like a big house cat. Overall this storyline just felt like a way to add a cheap bad guy into the mix. At least Snowball does get a pretty entertaining fight at the end, during this cliched train sequence. But how exactly did the old lady character end up way out there on her way to get cat food? And I can't believe she would just run him over like that twice.

Overall The Secret Life of Pets 2 is a very disposable sequel, that I would highly recommend just waiting to rent if you are interested in seeing it.