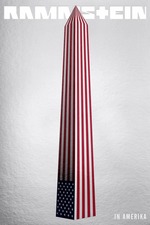 Through a very random series of events I got sucked down the rabbit hole of watching Slipknot live videos on YouTube yesterday and it made me think about Rammstein's In Amerika concert DVD that I've had sitting on myself for maybe 4 years..still wrapped in plastic. So, today was the day that I would finally watch it.

If I ever needed a reminder that music isn't only about the lyrics but is also about the actual music itself—likely more so—this DVD was just that. I do not speak German nor do I understand it. And yet, I like Rammstein quite a bit. I'd consider myself a casual fan. Their most recent release in 2019 was one of my favorite records of the year and still I listen to bits of it fairly regularly. All despite not knowing what the hell Till is saying in the songs; I don't even Google Translate the lyrics. I like it purely for the combination of the music and the cadence of the vocals.

Madison Square Garden supposedly fits 20,789 for a sold out concert. There is no way that more than 1% of that crowd speaks German but I'll be damned if I didn't see plenty of people signing along. Still, like me, all of the fans in the sold out arena were fans of Rammstein's music. When certain music hits you right then it just clicks regardless of anything else.

Being a native English speaker I've never had to experience being a fan of a band who sings in a Foreign language—aside from Rammstein. When I think about the fact that the two largest musical markets are the US and the UK it is crazy that fans all over the world who speak different languages ingest English-language music on such a massive scale. There's no way that the crowds in Seoul fully understand what Lady Gaga, for example, is singing about but they love it. That's the power of music, man.

I've read that Rammstein's live shows are crazy and their love affair with pyrotechnics is off the charts. After Rammstein In Amerika I can confirm that is true. There are flames, sparks, & explosions. There are flamethrowers on guys' faces and atop a pair of animatronic, metal angel wings. It's basically Mad Max: Fury Road on stage and in German.