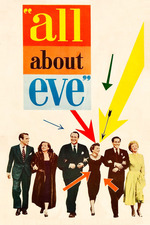 i have seen this movie so many times that i could honestly recite it in my sleep .... or at the very least, give you a play by play of every scene, lol. it was a good rewatch though, mainly because i was trying to see it with new eyes. and i failed. but it was definitely interesting!

after watching two seasons of killing eve i learned that some people compare that show to this film bc they both are about a woman being obsessed with another woman. and then i read some reviews here saying that they think this movie is gay, which was wild to me! honestly i have NEVER thought that while watching this, so i wanted to watch it again to see i’d be able to see it too. ultimately what i got is that although i think that this movie being seen as gay is funny considering how much i loved it growing up, i don’t really think that it is. i get what they mean though, especially at the beginning when eve is literally trying to CLIMB inside margo’s ass lmao. the thing is is that what eve *really* wants is fame, not margo. she’s obsessed w margo bc she has the life she wants, and as soon as she gets what she wants (the main role in footsteps on the ceiling, the rave reviews, the award) she doesn’t even SPEAK to margo. like. eve doesn’t care about ANYONE but herself and sees people only for what they can do for her, not for who they are. but i think it’s very possible that had i seen this movie for the first time NOW that i might be able to get it more. believe me i wish it were gay! and it is a little bit! but would i call this a lesbian film? no but i’ll let us/you have it if you really want it lol. it’s just a liiiiiiittle bit of a reach imo!

O Brother, Where Art Thou?