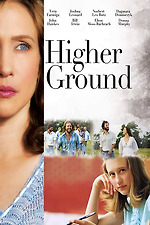 I was kinda afraid I wouldn't really get this on any level, because I've been an atheist pretty much as soon as I could consciously choose to be, but higher ground is crafted in such a gentle, genuine way that actually I really connected to it. I still can't fully comprehend that enduring human connection to faith (and please believe me when i say i've really, really tried) but stories like this - ones that are earnest without ever even coming close to being preachy or irritating - seem to act more as invitations rather than that clandestine exclusivity. this is one of the first times that I've seen uncertainty play as important a role as certainty, and it ultimately creates a very soft and forgiving narrative.

higher ground is also intentionally critical - particularly of women's roles in the church and in society at large, but it critiques that without ever falling into the easy trap of then being critical of specific women. instead, it lets them make mistakes and forge new relationships without ever giving in to the shame I habitually anticipated would come barging angrily in. that grace is such an obvious product of this film not only being directed by a woman, but having another woman write the screenplay and several female characters interacting, all of whom are written with warmth and sincerity. feels good to watch a female friendship that strong and that realistic depicted within a medium and a subject matter where a cornerstone like that is ignored often to the point of total erasure. final take: all movies about women by women are Good Content and they have my approval, especially if - like this - they're somehow combining something totally new with something universally familiar.