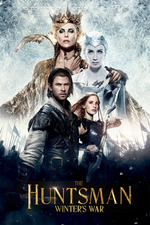 seeing as i've now bizarrely devoted so many hours of my life to a movie that, if we're being honest with each other here on letterboxd dot com, should never ever have been made, i feel that it's only fair i properly write about what i think of it, lest you all believe that i genuinely & truly think this is a quality film. make no mistake, it is not. actually, parts of it are horrendously bad, and by "parts" i mean pretty much everything that happens. miraculously, that doesn't stop it from being Wildly Entertaining, and i'm being quite serious when i say that other blockbusters have a thing or two they could learn from the huntsman: winter's war.

okay let's start with all the shit that's bad about this film, because there's a lot of it and i wanna make fun of it. number one on the list is, basically, this movie makes zero sense. none. it feels remarkably like someone took a velcro strip to every iconic work of fantasy, ripped it up & then just clobbered together whatever had stuck. there are moments that come out of nowhere, moments that feel as though they're going to further the plot only to abruptly vanish and moments that are supposed to be thrilling & climactic but fall short on account of their setup making absolutely no fucking sense whatsoever. it is WILD, and it is of course why so many critics (not inaccurately) have pilloried it so mercilessly. it's not as though the huntsman doesn't know what it wants to be; more that it wants to be everything at once, all the time, always, without stopping. it's a möbius strip of narrative incompetency.

also, for a movie with "war" in the title, the huntsman seems to just ... not know ... what a fight scene is ... aside from one at the beginning & maybe like 0.7 seconds of the climatic end battle, every other brawl is IMPOSSIBLE TO SEE. it's like someone has cropped a nolan movie and then hit fast forward: everything is dark, there are a lot of fists but i don't know where they're going or to whom they belong, bearded men are in pain for a bit before they're miraculously okay again. also, when most of your fighting is done in the sound editing booth i don't know what i need to tell you but it ain't good. (but mad props for letting jessica chastain do my favourite action movie heroine move ever though Y'ALL KNOW THE ONE I'M TALKING ABOUT.)

actually, sound is just all-around a weird part of this movie, and nowhere is it weirder than VOCALLY. i love her to pieces but jessica chastain cannot do a scottish accent. neither can chris hemsworth, though his is a shade better because he's got his natural flat australian twang creeping in rather than a melodious american one. but god they both sound ridiculous i mean i've seen this damn movie three times and there are still moments where i have no idea what the FUCK they just said - for example, over the course of the movie they keep reminding each other that "yeee fergaht yer baOOunds, Love." i must have heard this sentence ten times now yet i have no idea what it means. if anyone does, please come forward, i genuinely want to know.

accents aren't even the weirdest vocal thing though, because we've got LIAM NEESON'S SHAMEFULLY UNCREDITED NARRATOR running through the whole movie. he omnisciently pipes up with gem-like & totally useless observations such as "love isn't real. love is a fairytale," which booms out right as chris hemsworth is being chucked unceremoniously off a LITERAL CLIFF and "not all fairytales end" just before this fairytale does, in fact, END. this is unequivocally the funniest part of the film because when you actually listen to everything he's saying it sounds like one of my english essays i've written the night before the due date, meaning HE SAYS A LOT AND NOT A SINGLE BIT OF IT MEANS ANYTHING. NOT ONE BIT. does this make it the huntsman: taken 32? i don't know but i would also watch that movie.

just this weekend i finally suffered through batman v superman & i have to say it has a lot of unintentional parallels with this film because, honestly, both of them are born from completely obliterating ineptitude. this is where i diverge in opinion though, because i genuinely think the huntsman is good at exactly the things i thought batman v superman was depressingly deplorable at, and they would be: EMOTION and WOMEN.

and this movie is really emotional??? not in the melodramatic, please-cry-now kind of way - though there is a bit of that - but in the humans-feel-things-differently kind of way. it mightn't be very legible, but the huntsman really cares about how its characters FEEL, so that becomes the driving force behind the story (god knows the plot can't do it). it's oddly refreshing & intriguing simultaneously, & it is the first thing that saves this movie from a one-star eye-roll.

the second & most important thing is that, in the end, the huntsman: winter's war is a women's movie. it succeeds at letting women be people. the messiness of the written stuff actually paradoxically works in the female characters' favour - mostly because of the sheer talent of the three main actresses. they take the incoherent bullshit and they make it real by just living in the chaos of it.

make no mistake, i'm not saying the best way to write a woman is to just spin the Wheel of Character Traits, add some plot wielded by the sledgehammer of subtlety & then sit back & hope. that's a stupid formula and it doesn't work (LOOKIN @ U, JOHN GREEN). what i am saying is that messy women, women who want too much or nothing at all or women who are driven by envy or rage or lust or power or love or ALL OF THOSE THINGS AT ONCE are rare. and, as with all rarities, there's a preciousness to them, a reverence, an aura of "holy shit is this real? this?? SHE JUST DID THAT????? YES SHE DID." it's pretty cool.

SO CONTROVERSIALLY, THAT'S WHAT I'M GOING TO SAY THE BEST PART OF THIS MOVIE IS - that it's messy! it's messy as hell! its women are messy people! they make mistakes, they're all motivated by different things, none of them are innocent, none of them deserve absolute damnation (except maybe The Evil Queen but that's kind of in her job description and charlize theron found a way to make it really interesting anyway). they feel real because they are. also, because there are so many of them - there are actually more main speaking women than men - none of them have to be the awkward proxy for their entire gender. emily blunt's ice queen's struggles with and desire for motherhood isn't a comment on All Women's Need To Mother, because it's balanced out by her sister, the epitome of a woman who doesn't really give a fuck about anything or anyone as long as she Controls Everything and Looks Good (which she does. god everyone looks so good in this movie. maybe this entire unnecessary fuckton of words is only me trying to justify my watching this for a reason other than Women Being Hot. who knows? not me!). and sara's love for eric doesn't mean all women have to find a partner to be happy, because she enters back into it on her own terms. so really, what the huntsman says through its women is that they have a choice. they can choose what they want to do and who they want to be. that's all, and that's everything (especially for a blockbuster i am just saying).

also, i like it when women talk to each other, and this movie flies past the bechdel test in the first five minutes. i'd still like more female interaction - sara doesn't really talk to anyone other than eric, but chastain & hemsworth have such good chemistry that i DON'T REALLY CARE WHOOPS. besides, the movie itself is already streets & streets ahead of something like batman v superman, which my memory is telling me does not let any women talk to each other at all. (am i right about this? surely i am not right about this. i want to be wrong.)

listen, the huntsman is not perfect with its female characters, but it cares about them. it wants you to understand them. it doesn't treat them like things but instead like intelligent, competent players capable of picking their own decisions, mistakes and fights. it doesn't trip into the Strong Female Character trope. none of the women have to relinquish their femininity in order to be powerful. none of the main women are treated as of a lesser value because they're women.

anyway, after all of this - WHICH IS REALLY SO LONG I'M SORRY FOR CLOGGING YOUR FEEDS WITH UNASKED FOR OPINIONS ABOUT THIS UNASKED FOR SEQUEL - i think i've finally gotten my weird need to talk about the huntsman: winter's war out of my system. maybe. but if every needless blockbuster were to be this frank and free with its emotions, this open towards its female characters and this FULL of women, then the movie world would be a better place, because these needless blockbusters are just going to keep on coming anyway and they're better when they've got women in them. they just are. it feels weird to say a movie that objectively sucks and has a fuckton of problems is simultaneously a feminist film, but i really think it's true. watching this, i often felt like the filmgoer's version of a damsel in distress, stuck in a weird story i couldn't understand or escape from - but i was rescued. and i was rescued by the women. what a blueprint for the future that could be.