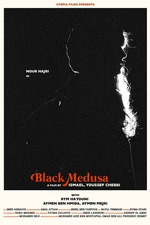 Ms. 45 is clearly an influence on this Tunisian arthouse female revenge flick. As in Ms. 45, the protagonist is mute, though here that's by choice. Also, as in Ms. 45, the only crime some of the victims appear to be guilty of is the crime of being a man. Rather than use a gun, however, this films "Black Medusa" wreaks her bloody revenge using a knife... or in one case, a mop handle. While we do not see the violation that led this once Promising Young Woman to Walk Home Alone at Night, we can certainly feel her horrible scars.

Shot in luxurious black and white with an often mesmerizing soundtrack, the only other character of significance is a female co-worker who struggles to get her silent colleague to open up. The existence of this character seems to suggest possible redemption, possible collaboration or even possible retribution, but the filmmakers always keep the possible poetically balanced on a knife's edge.