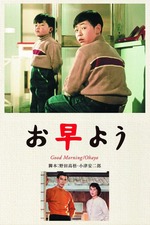 Two things stand out to me about this:
1 | ozu's ability of framing this peaceful neighborhood effectively rendering it into a maze was just great. It works so well for this story and themes
2 | Japan really started out with a strong tradition, and gradually became the technological marvel we see today. You can see almost a sense of guilt in giving in to the western customs, after what happened to them in ww2. Ironically, it's what makes them go on.

I enjoyed Good Morning in bits, it's my first Ozu picture, and while I was mostly bored, it has its quirks and enjoyable atmosphere. As a first approach, I liked Kurosawa much more, but we'll see where this goes in the future (I have Tokyo Story planned in a couple of weeks)