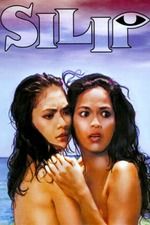 80s exploi inquest into the nature of sin, unchecked libidinal urges, the possessiveness of ego, male primacy and the scapegoating of women as victims of collective guilt in a Filipino seaside village community. A tough one to rate since it opens with a needlessly incompetent bludgeoning and bleeding of a buffalo. I am capable of watching the bodily dismemberment of deceased animals, but as a rule this kind of reckless violence done to them while they are actually living coupled with its filming for artistic purposes or otherwise is bottom line inexcusable. That was a very shitty way to open a film and it cast a sickly shadow over its remainder. But cultural relativism I guess? And it is admittedly relevant to the themes and directly associated to a crucial scene that takes place toward the end. The film is lopsided, too much passive carnal ballast in its first half, but it gradually becomes more commentative and eventful, but also nasty, peppered with a few surprising spikes of cruelty that linger in the mind, and culminating in a brutal and disturbing denouement.

Definitely a few faint strains of Woman in the Dunes here.