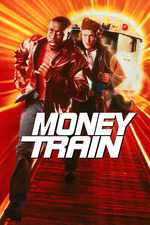 In honor of me forgetting about tax day yesterday, I watched the Wesley Snipes/Woody Harrelson classic Money Train. It’s even better than I remembered. Snipes at the top of his game and Woody Harrelson rocking the backwards flat hat to cover up his balding mullet are what the movies are all about. That, and trains full of money. I received one of those 90s flat caps once for Christmas back when I was eleven or twelve. It was a Nike Air Jordan one and it was cool as hell, but I never had the balls to wear it outside of the house. I just sat there alone playing Ocarina of Time with my Michael Jordan hat on. That doesn’t matter, though. What matters is Money Train. It’s a damn near perfect film and it should be up there with the likes of Speed and Con-Air.

Also, I’m not sure how many years have passed since this came out, but it’s crazy that Jennifer Lopez just keeps getting hotter and more famous as time goes on. She’s perfect in this and A-Rod is a dumbass.

Leprechaun in the Hood