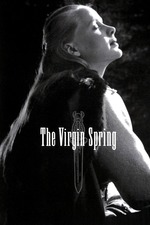 Ingmar Bergman tackles a frightening medieval cuationary tale that was passed around in folklore and naturally fills it to the brim with religious themes and symbolism. Set to the backdrop of a lush Swedish forest, the story revolves around a medieval family, Märeta (Birgitta Valberg) and Töre (Max von Sydow with a glorious beard); they send their daughter Karin (Birgitta Pettersson) to deliver candles to a church. She is accompanied by Ingeri (Gunnel Lindblom), whose role wasn't entirely clear to me; apparently she's a foster child or something.
Or course the forest is packed with danger and the trustful but vulnerable Karin falls into the wrong hands...

I wont give much more away of the plot, since it quite took me off guard. But I will say that what started out as a fairly subdued medieval folklore story, quickly unravelled into a devastating drama.
The film is clearly about innocence and the loss thereof, in a broader sense it's about the loss of faith, the deconstruction of a diety and drastic shifts of morality. It's a horrific story; one that influenced many horror films alike; and it reminded me most of the recent The Witch, as it appears to be a direct adaptation of an old folklore story.

The religious symbolism is the main driving force of this film. Every character seems to be a representation of a different face of faith. Also the God Odin made an appearance, with raven and all. I bit of a strange choice for Bergman to include a Marvel character in this, but maybe he was an avid comic reader at the time.
All joking aside, there was an abundance of symbolic ideas and at times it felt a little overwhelming. I bet it's a film that gets better with multiple watches, but I must say that there were times where the symbolism felt a little heavy handed. There was an appearance by a frog, because the Bible, and I thought "okay, I get it."

Despite the dark twist where the story takes us, the film is still beautiful to watch. Some of the shots are among Bergman's greatest, mostly through cinematographer Sven Nykvist's craft.

It's a great film and I can certainly see how it set the stage for Bergman's later films which are even better. A must-watch if you are into dark medieval fairy tales.

[Due to circumstances I couldn't post reviews for a while, so I'll be posting all reviews from monday till friday at once, so apologies to my followers for spamming the stream today :/ ]