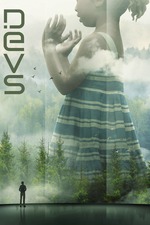 Devs is an ambitious sci-fi series from director Alex Garland. The similarities to Ex Machina were distracting at times, but these 8 episodes are more compelling and thoughtful than most of what’s out there. I thought Nick Offerman and Zach Grenier as Kenton were the best in terms of performance and character. Beyond exploring the out of control power of large tech companies, it’s more closely examining destiny.  If we knew the future could we change it, or is it inevitable? Do our choices matter at all? If they do could we go back and do things differently? This story explores all of these themes in a satisfying way.

The series is gorgeously shot, with seemless incorporation of vfx. The Devs set is really cool looking. On a production level it is easily on par with Garland's films. The use of sound was also of note, even the selected soundtrack was well incorporated into the scenes. There were some moments of acting that were weak and certain plot threads were a bit too drawn out, repetitive or predictable. Perhaps the predictability is the point, as what’s doomed to happen, will happen. Ooh how spooky. There was a point I thought, okay, I got it!

I have my issues with the tact on bit at the end.
Devs Ex Machina

I would happily watch this series again, and even more episodes if they can manage to do that. If we're comparing it to other writer/director driven miniseries like Too Old To Die Young, I think this is far more successful and accessible.

A Fistful of Dollars