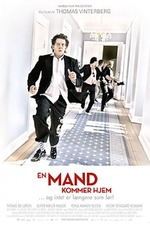 A Man Comes Home marks Thomas Vinterberg's return to Denmark and danish cinema after trying his luck in America. (A man comes home, get it?)

As much as I admire Vinterberg for his many talents, this film is a colossal failure. I've praised him for Another Round where he almost seamlessly combined drama with comedy, but with this film it's the other way around. I have no idea what genre best defines this film, as the "comedy" barely shines through and the drama feels unnatural. The characters and their relationships are barely established, and none of the motivations makes sense.

It's just a mess of equally good and equally bad ideas that leaves you wonderering what the point of all this shit actually was.