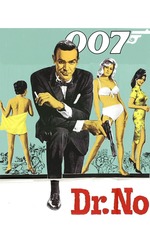 The first entry in the Bond film series does a marvelous job of introducing our protagonist, played perfectly by Sean Connery. However the film doesn’t quite manage to tell a story that exciting or engaging for that matter, as the narrative quickly loses it steam. The pacing is slow to say at least, and all the small plot threads amount to very little. The titular Dr. No doesn’t show up until an hour and half into the film, but his presence is actually felt throughout most of the film as Bond starts to unravel the mystery. When he does show up it’s only for two brief scenes, and it feels like a waste of a otherwise charismatic villain.

A good introduction to the universe and the protagonist, but not necessarily a good film by its own merit.