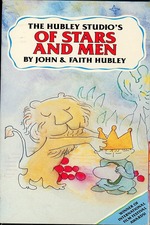 I miss when I was a kid and knew dick-all about science, back when the unknowableness of the world was exciting. For the record, I still know dick-all about science, but I find it less exciting now.  Somewhere in middle school I decided that science was clinical and exacting and consequently really damn boring and I started to tune out all the factoids and formulas because I hated that the world was all figured out. I miss the first grade, when learning that the Sun was a star was a revelation that would rock your shit for a whole week, when every science experiment felt more like a magic trick than a finely tuned verification of expected hypotheses, when belief and knowledge weren’t antithetical concepts but symbiotic ones, two expressions of the same feeling of overwhelming smallness in a big, big world. Wasn’t it cooler to wonder?

Oh yeah, anyway, Faith and John Hubley really capture that spirit of marveling at science in their animations, looking at something as stylistically dire as a textbook with the same energy of wonder and discovery as a kid learning about photosynthesis for the first time. It’s innocent and imaginative and I really think that more classrooms should engage with the poetics of science alongside the more objectivist emphasis on facts and figures. So many of the curriculum companion videos we watched in my middle-to-high school classes were rote explanations of de-aestheticized natural phenomena with some dumb comedy sketches sprinkled in there to hold our attention, which always came across as insincere and desperate, and convinced me that even the purveyors of science knew that their message was boring and had to be conveyed deceitfully, like feeding a dog a pill rolled up in some ham. Why did they never even try to make it beautiful? To talk freely and honestly about the marvel of it all, the existential miracle of matter? Why do we only ever get bloodless CGI modeling and plastic smiles as our ambassadors to the infinite? Why is curiosity so often talked about, but never expressed in an authentic, passionate way?

I guess this isn’t really a review. I’m gonna go make potions in the sink