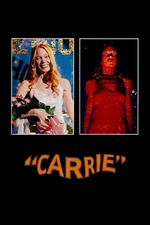 To be honest I have never been this scared to see a film in my life. Not just because of how scary the film looked like but what everyone has told me about it. My parents even told me that this was the scariest film that they ever saw back in their day. My dad actually saw the film in the theater back in 1976 and told me it was one horrifying experience so I never wanted to watch this film. However, as I grew more interested in watching movies and in the horror genre with The Shining I knew eventually I had to see this film. So is this film as scary as everyone says it is? Yes, it is and is a phenomenal horror film in my eyes. The story is really well-told, the cinematography is fantastic, the musical score is phenomenal, the atmosphere is eerie and uncomfortable, the imagery is disturbing and creepy as fuck, the scares are effective and give out a good jump, there are some really intense moments, and the acting is amazing from everyone especially from Sissy Spacek who did a fantastic job in her role as Carrie White. Even with so many amazing things about this film, there is one thing that is the best thing about the entire film and that is the most famous scene in the film. That being the famous prom scene which is one of the scariest scenes that I've ever seen in any horror film. However, it's not just when Carrie is using her telekinesis to kill everyone at the prom that is scary. It is when Carrie is just at the prom having a good time. Before the most famous scene actually happens you see Carrie finally getting a break and it's one of the most well-deserved and sweetest things that I've ever seen. Seriously I don't think I've ever seen a film that had a character having a good time which made me that happy and just relieved but that's even more terrifying cause you know that her good time isn't gonna last that much there and when the pig's blood eventually falls on her it really does give you the creeps knowing that she's gonna snap. Overall I could write about this film for so long but it just shows how amazing the film is. One of the best films based on a Stephen King book or novel. While The Shining and The Shawshank Redemption will always be up there as one of the best films based on a Stephen King book or novel Carrie is up there right along with it. A masterpiece of horror cinema and If you love Stephen King's work or if you're a horror fan then you have to see this film. A film that deserves all the praise it can get for terrifying us to death on so many levels and for so many years.