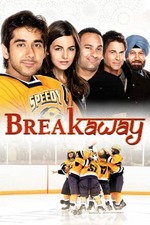 Breakaway (2011) has that very strong "a CBC production" vibe. The acting is pretty crappy in that particular made for Canadian TV way and Rob Lowe's character in particular is just kind of THERE (and also the older brother(?) of the main romantic interest). Russell Peters does get in some decent one liners but he definitely felt shoehorned in there at times with the rest of the celebrities they pulled in for this one.

Breakaway is, however, a sports movie at its core and it does have the heart aspect you want in that regard with training montages and facing the same team at the start and the end of the film. The cross section of Canadian hockey tradition and Sikh religious tradition is very unique and gives the film a quintessentially Canadian feel. Plotwise, the eventual solution to the main problem wonderfully combines the two cultures, which are at constant odds, and the main source of tension throughout the course of film.