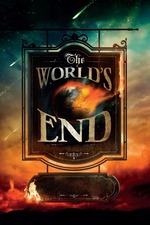 Neither as funny as the first two films in the Cornetto Trilogy, nor as stylistically interesting, The World's End feels like it's missing something throughout its entire runtime.

The gags aren't quite right, the action isn't as engaging, the characters aren't as likeable. And most of all, the plot is just... stupid. And too familiar. At times it is extremely reminiscent of Shaun of the Dead, which only reminded me how much better that film is in comparison. I guess even Edgar Wright can make a dud. It's crazy to me that he followed this with Baby Driver, arguably the best film of his career thus far. Hopefully we'll see more of that and less of this in the future.