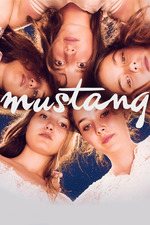 There's so much to talk about in Mustang, a film that centers on the adolescence of five girls from Turkey whose childhoods are simultaneously taken away from them while kept behind lock and key, but of particular note is the caring relationship of sisterhood and how much older figures act as shields for the younger.

As they grow older and find their freedoms more and more restricted, they must contend with tradition fully taking away their agency as women. None of them really knows what that means, at least not at first, but soon the oldest sisters begin to understand it fully and pass that along to the younger ones. Marriage, arranged and loveless, is a fate for them, and though it doesn't mean they can't find a happy life it does mean that they can't find it where they're currently at. That's what befalls the eldest, and soon the younger ones see firsthand what that means.

"The house became a wife factory that we never came out of."

So they understand they need to get out while they still can, before they're past the point. One of the middle sisters has her innocence taken away from her and when no adult in her family comes to help she takes matters into her own hands. Soon the younger ones see firsthand the reality of abuse.

And it is finally when the youngest are of age to be wed that they've seen enough to be fed up with what their sisters have endured, and must break away with their freedom before it is slowly taken away from them as it was taken from their siblings. It is not that they are necessarily luckier, but that they have seen the effects of oppression throughout their childhood while being protected from it firsthand – and that is enough to make them the first to escape. I'm sure their older sisters would be proud.