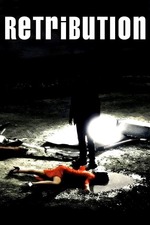 Perhaps more than anything else, the scariest thing is what's already there. Retribution understands this and, like a low droning hum invading your home that you can never quite pinpoint where it comes from, works tirelessly to bore that fear into our minds until slowly, surely, we can no longer trust anyone nor feel safe in any place in fear that we'll find that which haunts us has always been alongside us.

From the very start there's something wrong with the case: a woman is drowned near the waterfront, but her lungs are full of seawater; other cases appear which have identical MOs; and each clue we find points to the detective, our protagonist, having been there. Our detective laughs, and we might laugh too. That's clearly ridiculous, there's no way he's the murderer – if so then why is he trying to solve these cases, and wouldn't this be too easy an answer? It's too obvious of a storytelling device for us to lend any real weight in, yet at the same time it continues to preoccupy our thoughts. Ridiculous or not there's still something very wrong, and as our detective becomes paranoid of everyone around him so too do we find ourselves distanced from him. We imperceptibly become a character-less voyeur, the audience uprooted from a singular perspective and re-internalized into that of a ghost, a role in which we simply hover alongside the detective and silently observe, no more, no less.

Slowly it unravels, or more accurately, it's uncovered. Because the things that haunt us here are not external bodies or outside factors but the stains on our walls we wish to plaster over. The fear is not in finding something we never expected, but in bringing to light what we kept in the dark. People are so good at denial they'll even fool themselves, and our societies are structurally built to sustain those lies. But we're not the only invisible presence in this film; if you look hard enough, they've always been there.