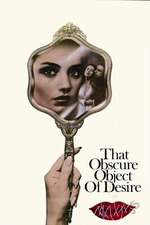 That Obscure Object of Desire

When you don't know what you want but you want it regardless, that's the natural conclusion presented in That Obscure Object of Desire. Man lusting after woman and woman pining for man's love, it's a dynamic as old as stories have been around but refined to a caustic edge and laced with tormented passions.

You need trust. Trust that the person you seek will give themselves up to you in due time, if that's what both people want. Doesn't matter if it's sexual or romantic, these things can't be forced but must be earned through patience and love. What good is loveless sex to him if she isn't enthusiastic about it? What good is his trust if she keeps lying about herself? It's sad, really, to see these two destroy each other and destroy themselves attaining their desires from the other by building it on false promises. In a sense we understand; they do it to protect themselves because to be open and honest is to be vulnerable to getting hurt. But then, you can't build a strong foundation in your relationship if you aren't even truthful about the architecture you want.

So that object they desire? They think they know what they want, but they don't, not really. And as long as they're unwilling to really look at themselves in the mirror and reflect on what it is they really want, it remains elusive, veiled, obscured.