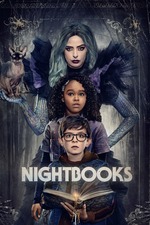 Goosebumps + Hansel and Gretel + Scary Stories to Tell in the Dark = Nightbooks -- the book, and now the movie.

Two precocious pre-teens get trapped by a witch played by Marvel's Jessica Jones -- er, I mean Krysten Ritter who I swear looks like Anne Hathaway's little sister. She's awesome -- and the kids do a good job too. There's a cool looking set-piece of a black-lighted lab/nursery which would make a great haunted house.

Unfortunately the execution is uneven as it tries to put life into the very tired trope of kids trapped and trying to escape from ________ (fill-in-the-blank).

It's clearly a love letter to horror lovers though, and sort of randomly, The Lost Boys. There's a scene in the beginning where a clip from the movie is playing on a TV -- only big fans that have watched The Lost Boys a bazillion times would catch it. And then there is the big connection with the cover of "Boys don't Cry" -- my favorite songs from the movie.

I feel the urge to put on The Lost Boys right now.

P.S. and mild spoiler: I loved the cat. It's one of those skinless creepy looking fuckers that harasses the kids and can zap around the house by going invisible.

There's a scene where one of the kids is about to chow down on an open-faced peanut butter and jelly sandwich at the kitchen table and this brown stick-like thing starts growing out of thin air over the sandwich -- and, you guessed it! The invisible freak of nature took a turd on the kids sandwich.

So juvenile, but so awesome.