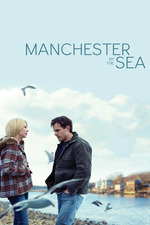 Manchester by the Sea is a 2 hour and 17 minute representation of that moment when you walk up to someone who has just experienced a tragic personal loss - and you don't know what to say... Manchester is a moving piece of film because it’s mournfully true to life.

The stylish film revolves around a janitor (Casey Affleck) in Boston struggling to cope with a slew of personal tragedies and his difficulties acting as guardian to his 16-year-old nephew (Lucas Hedges) following the death of the janitor’s brother (Kyle Chandler).

Manchester is a real stop-and-smell-the-flowers piece, which sacrifices the traditions of the three act plot, for the cinematic equivalent of taking Polaroids of a heartbreaking moment in someone's life and taping them all together to relive. This lack of expected plotting may leave the film a little hollow for some, but resulted in a grand feeling of authenticity and realism for me that emphasised the character's sorrow.

As much as this film is a tale of tragedy and loss, and it is, it's also a story of social isolation by those who have shunned someone in a community, and the awkward social interactions that follow when they attempt to reintegrate. Every piece of small talk, cup of tea or polite wave feels true to form.

Casey Affleck's social malaise is painted across his expressionless face, and he commands the screen through subtlety and the understanding that there is a river of anguish ready to explode from his character, Lee Chandler. All the plaudits that Affleck has received for Manchester are warranted and earned.

The film's ending feels so earned for me as well, nothing flashy, no cliches, no breakdowns and not a tied bow to be seen. Instead, it ends with a compromised outcome for both Affleck and Hedges' characters, but one that feels entirely consistent with what is possible from Lee's shattered pathos.

Manchester-by-the-Sea, MA - a town with a population of roughly 5,000 people is wonderfully shot, and this is truly where the film making and cinematography comes to life. The icy, cold surroundings of this small town reflect the guarded and locked emotions of Lee.

The best scene of the movie for me is the moment when Lee meets his ex-wife Randi (Michelle Williams) and its amazing portrayal of feelings that are too hard to re-conjure, moments that don't need words and the pain of the only choice being to let go.

Manchester is a great movie, centred around a tormented figure coming to terms with adversity, loss and regret. A stellar film in 2016's releases, and something that I'm glad I got my way around to watching.