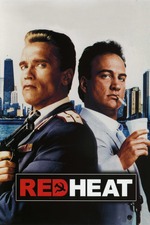 Given the recognised talent involved and the production weight behind it, it's disappointing to find that Walter Hill's buddy-cop thriller Red Heat, is nowhere near as entertaining as it ought to be. Arnold Schwarzenegger stars as a Soviet police officer, assigned to the USA to track down a dangerous criminal from his native land.

Opposite him, is James Belushi as a wisecracking Chicago detective.
I can't sit here in all honestly and tell you Red Heat is a bad film, it's just not a memorable one. Schwarzenegger looks for all the world like he's being asked to repeat his performance from The Terminator, as complete with naked introduction, his cold, monosyllabic character does most of his communication through hard stares. Between his fish out of water character, Ivan Danko, and Rocky IV's Ivan Drago, it's fair to note that mainstream, action movie depictions of people from the former Soviet Union have been a touch one-note.

As comic relief, James Belushi co-stars to reasonably good effect, providing a decent foil for Schwarzenegger's overplayed stiffness. Between them, they only manage to conjure fragments of fleeting chemistry, something Walter Hill was able to cultivate to much better effect in his 1982 thriller, 48 Hrs.

With a good supporting cast, featuring the likes of Laurence 'don't call me Larry' Fishburne, Gina Gershon and Ed O'Ross, there's perhaps a classic film buried under a pile of uninspiring cliché. As was the case in Schwarzenegger's 1985 effort, Commando, a female character (Gina Gershon) utters a line bemoaning the "macho s*!t". It's often hard to disagree, as the impact of punches are dubbed with a sound effect akin to that of a wrecking ball hitting skyscraper, while the regular sound of gunfire might induce a new bout of tinnitus.

Red Heat is serviceable, but ultimately incidental, especially in terms of the illustrious action career of Schwarzenegger.