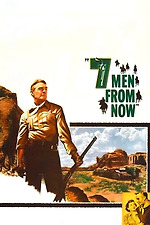 "That killin’ – they ever catch up to them fellas that done it?"
"Two of them." BANG. BANG.

This is the Ranown Cycle’s secret weapon: it’s never in the various box-sets of the series, as it was produced by John Wayne’s company. “Let’s use Randolph Scott, he’s through,” Wayne said. Director Boetticher proceeded to “[shove] Scott up Duke’s ass”, across seven small but vital films – variations on the saddest of themes. Within the run are three unassailable classics: Ride Lonesome, Comanche Station and this one.

Burt Kennedy’s script here must be about the best in B-Westerns. The plot is cleverly drafted but the magic is in his dialogue, which says so much, so consistently, in so few words, all of them stinking of the soil. Kennedy can define entire characters, entire lives, with a single line – not just the person spoken about, or the one speaking, but those listening and, in one particularly memorable instance, refusing to respond. He also gets involved in some mild revisionism: the 'Indians' may be on the warpath, but when Scott's vigilante encounters the US Cavalry (their arrival in the film set up as a blessed relief), the conversation is anything but predictable.

Scott just fits these films – his limitations a virtue in a series that requires single-mindedness and taciturn nobility, his characters otherwise hollowed out by grief – but this one is really a showcase for Lee Marvin, the most important of his early years. The greying behemoth merrily strolls off with the film as a gobby killer who’s not all bad – just mostly. His scene at the dinner table is one of the greatest pieces of acting you’ll ever see, serving up a wild mixture of braggadocio, gossip, arrogance, cruelty, humanity and horniness, and encompassing everything from a cool finger-gun to exposition that seems like art.

There are so many fine moments within his performance, though: being a macho bully in the back of a wagon (Boetticher suddenly realising what he has on his hands, and affording the actor a huge close-up), playing with his pistols in a saloon, or finally facing off against a man he might have hated – but can’t.

Gail Russell and a sometimes histrionic score in the ‘50s style may be obstacles for newcomers to cinema’s most clandestinely cool genre. But Boetticher’s framing is frequently inspired (that glorious shot of washing on a line, framed against a vista; Scott the Loner seen through a departing wagon, with shades of The Searchers), and there’s one immense, super-stylised death scene near the end: a gunman staggering, empty handed, in the desert, before (perhaps) a nod to von Stroheim’s Greed.