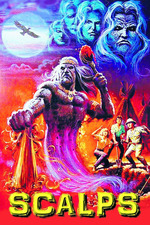 Scalps follows a group of archaeology students poking around where they shouldn’t be on sacred Native grounds. What the heck do they expect? To unleash the spirit of Black Claw, a vengeful spirit who punishes all who trespass, of course.

I was totally on board with this lower budget scorcher. The music was a synthesized mixture of sounds which could’ve doubled as foley, the make up and effects were cheap and nasty and it trucked right along on schedule. This was a wallop of a double feature with The Slayer from 1982 and this might be one of Fred’s catchiest. I read that 5 minutes were cut out of the version I watched to make room on the tape, but all gore scenes remain intact. Also, Fred provided scrap footage along with the final cut to the distributor, who did their own “enhanced“ version with a bunch of extra footage of the lion monster, which had been shot only for outtakes and never intended to be in the final product! The DVD reissue has the original Fred edit (the Fredit).