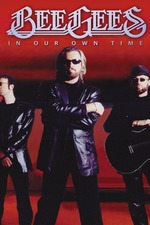 Feeling really sick today and I needed a break from the heavy Malick stuff, so I opted to watch Bee Gees documentaries, haha.

This is the best documentary yet (there is another one arriving on HBO in December though, called Bee Gees: How Can You Mend A Broken Heart), it tracks their entire career with interviews and live footage over two hours. The highs, the lows, the disco, it's all here. And it was fortunately made before Robin Gibb passed away.

I thought opening it straight on a musical number was a little odd, and I can't fathom how you can make a two hour long Bee Gees documentary without mentioning "I Started A Joke" a single time (!), but it is very enjoyable and fairly informative, if a bit shallow. Maybe they just didn't have a ton of drama in the group, but there really isn't anything..."meaty" here, for lack of a better word. It's "we did this and then we did that and then we did this", but that's perfectly watchable and they allow the music to speak for itself. One highlight if you only know the band from their disco stuff is that you get to see their incredible career which started when they were kids in the 50's and lasted all the way into the 2000's, and you also realize just how many great artists they wrote songs for (or with), including Céline Dion, Diana Ross, Barbra Streisand and others.

So yeah, a fun and perfectly enjoyable documentary, but it isn't an emotional rollercoaster. You get some good info and some good music and it's good old time about a band that probably never got enough respect when they were active, and for most they're just "those Stayin' Alive dudes". This one is worth checking it if you still think so.