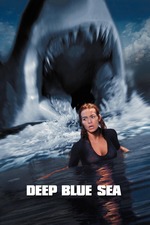 Oh man, this takes me back to the good old VHS days. I was about 11 years old when we bought (or were given) this movie on VHS tape, and can remember having parties with friends from school just to watch Deep Blue Sea, the third coolest movie of 1999 after The Matrix and The Phantom Menace! How things change.

A group of sexy research scientists in an underwater facility are experimenting on sharks to potentially create a cure for Alzheimers, but making their brains larger only results in them munching on them more efficiently and threatening to sink the entire station.

There was a strange period of time in the late 90's when Hollywood tried to make LL Cool J into a movie hero. In 1998 he was in Halloween: H20 and one year later he played the..religious..chef that has a parrot for a friend and battles sharks. Yeah, it's one of those movies, haha. I swear to all that is mighty though, the song he provided for the movie, "Deepest Bluest (Sharks Fin)" is still a piece of golden guilty pleasure! It's so on the nose that I can't get enough of it. The music video will make your life richer.

Finnish-born Renny Harlin directs this with such a kind of clumsy delight. The movie is very well aware of what it is, and even though the plotting and the "character interactions" are laughable, the movie is always aware of that, and focuses on one thing - scenes of huge sharks tearing people to pieces, including poor Samuel L. Jackson who had just given the most rousing survival speech of his life, haha. Poor Stellan Skarsgård gets it even worse though! Arm bitten off by a shark only to be dropped from a helicopter into the ocean, and then tossed back into the facility like a shark's chewtoy.

This falls firmly into the "guilty pleasure" category, but there are qualities about it that I genuinely like too - the setting is great, the pacing is really good and the special effects still look good generally speaking (with the exception of a couple of iffy CGI shots). When the sharks are practical, and there's probably about a 60/40 ratio here, they really look good. This movie is not Jaws, it's not even Jaws 2 (which I actually prefer to the first in some ways - I know, sue me), but when you crave something cheesy with a bite, this is a great go-to movie on Netflix. Just remember to count the number of times that Thomas Jane's character falls over, and be sure not to miss LL's acting after he has been recently mauled by a shark. First he regains consciousness just to mumble "It's the devil, you know" only to fall right back again, haha. Later he hears that someone is being attacked and I swear to Harlin, he kind of just..pops one eye open like a sleeping kid trying to sneak a peek at Santa bringing presents on Christmas morning. Inspired acting, haha. And just why do they have to kill the last shark anyway? Sure, it threatens to escape into the ocean, but..is that really so bad? Would it upset the ecosystem? Devour every single creature in the ocean? ..get a PhD?

A great movie? No. A "good" movie? Technically not even that. But I'll be damned if it isn't fun to watch for a myriad of different reasons. They may be wrong, but they feel oh so right.