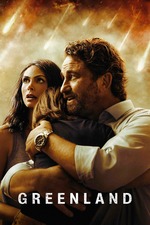 A family of three try to survive a comet shower wiping out large parts of the Earth, but they are separated along the way.

I enjoyed this one a bit more than I suspected. Then again, it is 2020, and I think the last disaster movie I watched was San Andreas with The Rock (and think I had to pour chlorine into my brain after that one, haha).

The movie has a really solid start, and the first..hour almost was actually quite decent. It doesn't focus as much on "look at the big explosions" as a Roland Emmerich movie might, but the human characters and the fairly grounded and frightening idea of how you would try to survive. For a good section of the movie Gerard Butler is just walking around trying to get his damn phone to work, and that's sometimes more intense than a thousand explosions.

As it goes along though it inevitably piles on more and more disaster movie clichés. I don't want to spoil anything here but I think you know a lot of what I'm talking about. It also introduces character moments that feel tremendously out of place and probably could've squeaked by earlier on in the story, if ever. And when big things happen, of course you can expect a bit of CGI, but again, I think it's largely done pretty well in that it is more about the human experience than long montages of destruction.

I think it is a perfectly decent rental, especially in 2020, when paranoia, death, fear, destruction and fire are sadly all around us. If Gerard Butler can stay strong throughout his ordeal, so can you!