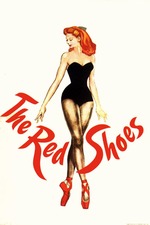 I've been meaning to watch this for a long time.

In this classic ballet film, a young dancer named Victoria Page and a conductor named Julian Craster join the ballet productions of the stern Boris Lermentov, under whom they both excel in a performance of The Red Shoes by Hans Christian Andersen. But Victoria is torn between a private life and the impossibly high ambitions of Lermentov: to dance, and only dance...forever.

I see why this is held in high regard (and inspired films as diverse as Suspiria, Perfect Blue and Black Swan), it is a visually striking film for its era, the very early days of Technicolor film, and at this point the color strip technology wasn't even that advanced yet, but that makes for a film that is wise to hold flurries of primary color back and then explode into lavish and seemingly impossible feats of visual imagination. The highlight is undoubtedly the fantastic (and fantastical) performance of the Ballet of the Red Shoes right at the center of the film, quite literally. I can't help but wonder what the audience of the ballet are seeing though, when so much of that sequence is only possible through the medium of film.

As for the rest of the film, well, I respect it greatly but I always felt a touch removed from the characters. They're divas to say the least, haha. I know that's intended, but alas. Also, Vicky herself isn't really given much breathing room as a character - I realize that her main way of expressing herself is through the dance but that's the only way in which she takes center stage. ("But Robin, that's the point, men are speaking on her behalf, telling her what to do, yadda yadda"), I get it, I still wanted more agency out of her. And I realize the irony of writing that, I'm the one usually complaining about the exact opposite these days.

I do think this is a film worthy of your time, and I greatly respect it in terms of historical value, but beyond the actual dance performances (which are marvelous in every sense of the word) the characters can't help but feel a tad stiff and dated, and that kept me from fully embracing the film as much as I had hoped to.