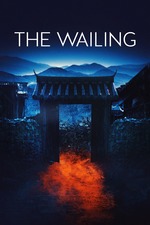 The Wailing is a South Korean horror film about a policeman living in a small village with his daughter whose life is turned upside down when a strange sickness begins to spread, and he suspects that a mysterious stranger might be to blame.

There was a lot to enjoy about this one. It is very well filmed and put together and there is some great acting here (especially from the little girl who plays the daughter, she really goes through the ringer, just..wow). The special effects are also really well made and even though it tonally starts as a bit more of a bumbling comedy-horror (Memories of Murder meets evil forces?), it gradually becomes darker and more serious.

I think the major downside however is just the sheer length, at nearly three hours long (two hours and forty minutes), because the story really goes all over the place - from A to Z and back to D and jumps through F only to revisit Z to flirt with B and then back to Z, if that makes any sense, haha. The horror scenes are really well put together, gruesome and impactful for most of it, but they're just..pulling in about five different directions, with twists and revelations and counter-twists and tonal shifts and..it was a bit like watching four different horror movies at once. All of them well made, but when you mash all of this together it becomes such a hodgepodge of ideas that the final result is unfortunately a bit weaker than it might've been with a more focused and streamlined story. I think if you edited this down you could have a tremendous horror film, but it is stretched out and just..throws everything but the kitchen sink at you - horror, drama, comedy, and various horror elements both grounded and mystical and various...manifestations of horror even, it's just a lot to take in.

I make it sound pretty bad, but the film is well worth watching if you prepare yourself for a film that will kind of "pinball" all over the place. While it does it's always well produced and again, I really have to give credit to the actors for going through one hell of a ride, but I think it could've been streamlined for a more cohesive and effective result.