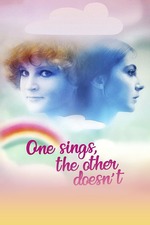 One Sings, the Other Doesn't

I feel like this movie just did not walk the walk. I'm going to be delicate here as I am a man and don't want to talk down on this film in a way that resembles manslpaining. Especially on a work that is (supposedly) as feminist as this one, I understand that I should tread lightly if I am to dismiss it. But as a feminist, I'm going to.

Yes the film claims that it's leftist and pro woman but if you stop to think about any of its conclusions about the matters I just don't see it. It starts strong. We have two stories initially. One about trying to get an abortion when it's difficult and taboo and the other about a woman not fitting a man's stereotyping as he photographs her. The first is used to explore women supporting each other and doing what they need to do to get by and the second helps realize the idea of women not fitting a societal mold. But eventually the film meanders into eyebrow raising territory to say the least.

Halfway through the film one of our two leads talks about "becoming a woman" once a sailor uses her for sex and our other lead talks about "being more herself" around fully veiled women (though later she doubles back on this, admittedly.)

But then by the end our one woman finds happiness through marriage and the other through childbearing? Which bleeds into that (again even though it says otherwise) this film really seems to feel like having children is the peak of womanhood. We see that throughout and it's so engrained in the text that eventually an extra even brings attention to it but it's dismissed. There's also scene after scene of women being happy together because they can help raise children. And that's so prevalent that it shows up in the narration.

And usually I wouldn't put this much weight on a film's opinion of social justice but since that really is what this film is (or is trying to be.) Every scene fits into its feminist narrative. By that I mean the story is a means to an end to explore its themes. Because that's what the film is that's what I feel most inclined to talk about in reviewing it and its ideas just aren't there.