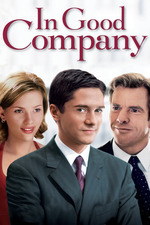 "For what it's worth, I enjoy talking to you more than anyone else."

I understand that not many people like Topher Grace as an actor. I'm not one of those people. As a young boy, I modelled my mannerisms and personality after Eric Forman from That '70's Show and even now, I always give his films a chance, and even if they're not very good (The Big Wedding), I usually like him and his performances.

And in In Good Company, he gives his best screen performance to date. This should've been a huge star-making role, as young corporate hotshot Carter Duryea, but I think people were expecting him to be a bit more Jerry Maguire-y or Jordan Belfort-ish (or the pre-2004 Jordan Belfort equivalent). While Grace gives Duryea charm and confidence quite like those two characters, he also gives him a naïve and lonely angle, and Grace really makes it (and the entire film) work.

The rest of the film is as inoffensive as light entertainment gets. It's predictable, but full of heart, with the always reliable Dennis Quaid delivering a solid performance alongside Grace, some really nice moments of subtle character development and a few good laughs as well.

But Topher Grace is still the reason I like it so much, as there's not many things more satisfying to me than to see an actor I like and consider a bit underrated to give the standout performance in a good film.